Quirky buildings bedecked in timber and pastel hues? Check. Romantic punts and a river known as Little Venice? Check. Frolicking otters, storks and Europe’s largest wooden carousel? Again, check.  Nestled in Alsace near the German border past the hill affectionately referred to as the ‘Ballon d’Alsace’, is the pretty little city of Colmar, widely considered to be the crowning glory of the Alsatian wine route.
As well as being the birthplace of Pierre Hermé (Vogue Magazine’s ‘Picasso of Pastry’ & ‘Dior of Desert’), Colmar is arguably most well known for being the hometown of Frédéric Auguste Bartholdi, the designer and sculptor of the iconic Statue of Liberty. The cityscape was also depicted as the magical and kaleidoscopic backdrop to 2004 Oscar nominated anime ‘Howl’s Moving Castle’. Based on the novel of the same name by Diana Wynne Jones, the stunning animation of Studio Ghibli and the Walt Disney Company sets the scene for a captivating story of love and conflict.

Over the centuries, Colmar – along with the rest of the Alsace region – has found itself torn between countries, religions and cultural identities – (changing nation and language from German to French and back again in 1673, 1871, 1919, 1940 and 1945). Today, with its bijou French streets framed by historic architecture straight out of a Brothers Grimm fairy tale, Colmar offers up a heady mix of art, heritage and fine wine. Each building and street has a fascinating story lying dormant amongst the cobbles and timber, defined and underlined by its unique blend of German & French history and cultural identity.

How did we decide upon Colmar as our first destination of our Euro Road Trip 2015? As we drove off the ferry in St Malo, plans to stay a night strolling around intra muros were scuppered when we found ourselves faced with heavy rain. Having not really planned our first destination other than knowing that we wanted to head in the direction of Germany, we typed Colmar into the satnav and continued onwards. A siesta at a Formule 1 in the early hours of the morning (oh the glamour) outside Paris and a cross-country drive along the Alsatian wine route later, we had reached the heart of Colmar.

We decided to stop at an Ibis Budget (modest, but believe me it was a step up from the Formule 1) – whereby Josh found himself momentarily locked into a one-way system and had to drive round in circles whilst I was unceremoniously booted out of the car to go and find a room. But we were soon in the hotel, unpacked and ready to go on the prowl for the top recommended sight on trip adviser – Petite Venise (Little Venice). With a map procured from reception, we were on our way.

We suddenly caught a glimpse of Petite Venise as we turned a corner, reaching the Quartier de la Krutenau. Having had bad weather for most of the drive from St Malo, the sight of the sun breaking through cloud above the roofs of the pastel pink, duck egg blue and pistachio buildings was certainly atmospheric. With basking carp and little barques transporting sightseers down the waterway, I almost expected the other passers by to burst into song, or for a posse of animated bluebirds to swoop down and present us with a Lady and the Tramp bowl of spaghetti or a bouquet of flowers. Of course, neither of these things happened as we gazed upon the scene, however the highlight for me was glimpsing an otter playing underneath the pontoons and jetties of the houses lining either side of the Lauch river. (Fact – there is a stork and otter sanctuary in nearby Hunawihr). 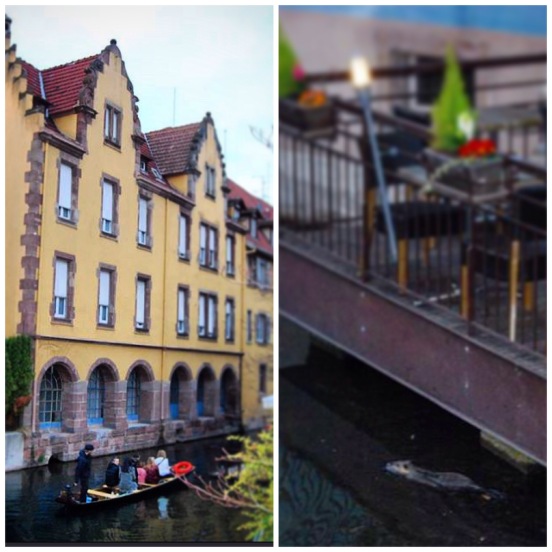 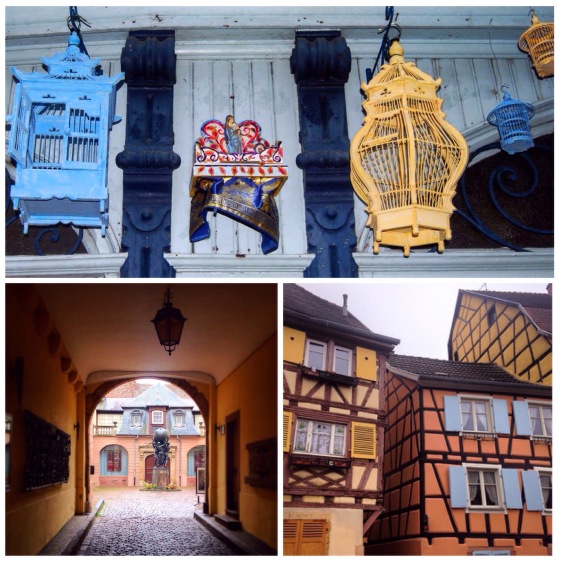 The river Lauch used to be a focal point for commerce and fishing – and Colmar’s links to its fisherman heritage are evident in the names of some of its streets and quarters (Rue de la Poissonerie & Quai de la Poissonerie). After a thorough exploration of the Fisherman’s district, someone (…Josh) decided that it was time to find something to eat, and as neither of us are particularly keen on fish (despite coming from an island and despite the fact that one of us – mentioning no names – has spent a lot of time recently fishing off isolated rocks on the west coast) we had to give the fancy fish restaurants along the river a miss. After some debate on whether we were brave enough to sample the regional delicacy of choucroute (aka. sauerkraut & sausage) we settled on a cute shabby chic inspired bolthole on the grand rue called Le Caveau de St Jean. With menus presented on chalkboards and vintage singer sewing machines forming part of the décor, the cuisine and ambience proved alluring to tourists and locals alike. The cosy caveau became so busy over the course of the evening that punters had to be turned away at the door. 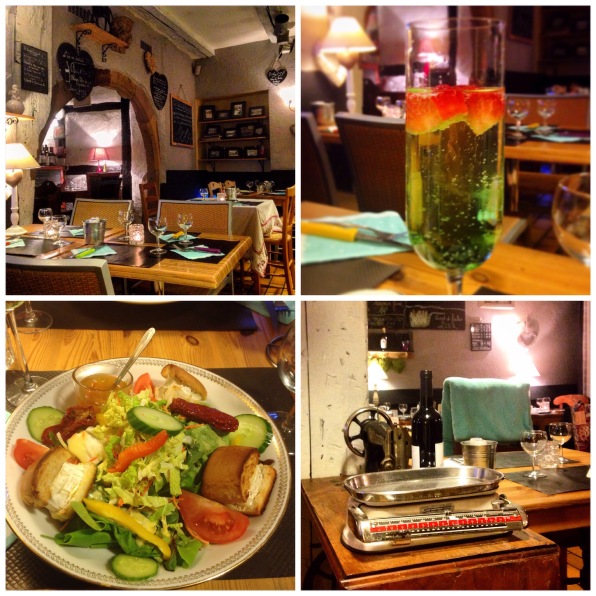 Having suitably wined and dined (on a quirky combo of basil and strawberry crémant d’Alsace & salad accompanied by what seemed to be marmalade) it was off back to the hotel through the eerie old worldly streets. En route, we admired the elusive choucroute’s name in lights.

Before setting off for Germany in the morning, we had a quick stroll around the Champs du Mars, taking in the majestic wooden carousel (as well as some croissants). Protected from the elements, the carrousel built in 1900 features medieval characters and is reportedly the largest of its kind in Europe.

For a pitstop to the past, why not take a journey to Colmar? This delicious chocolate box bonbon of a city is waiting for you to unwrap it and discover its history. Plan a trip in summer to enjoy dining out by the river Lauch at its best or go during the Easter holidays to be surrounded by festivities and unusual chocolate sculptures (including your generic Easter rabbit, rabid rabbits and even a parade of Olafs from Frozen).

This site uses Akismet to reduce spam. Learn how your comment data is processed.