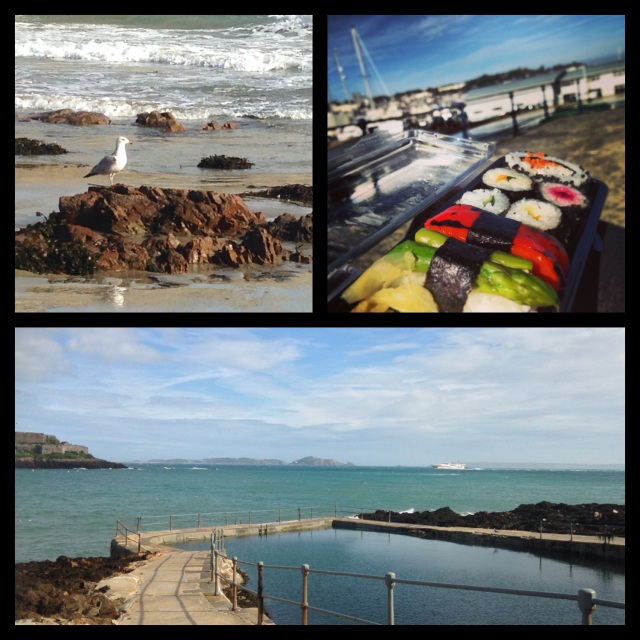 Monday afternoon, I found myself in town with a few hours to kill. The sun was shining and although there was quite a strong breeze (i.e. strands of my hair were dancing in the wind like the tentacles of a hyperactive octopus) I decided to soak up some much needed vitamin C.  I bought some vegetable sushi and headed over to Havelet to look out over the Channel.  It was high tide and the waves were hitting the shore quite aggressively, however I was feeling happy about the sunshine and so instead of catching the bus home, decided to kick off my shoes and go a paddlin’.  The temperature was surprisingly mild for October and I almost wished that I’d brought swimming stuff with me. I say almost. Being a weekday, most people were indoors, leaving me alone with… the gulls.

Guernsey gulls, by the way, are quite savage feisty creatures. They have no fear. They will rip a sandwich from your hands in a flash ; many a St Peter Port office worker has been left alone on a harbour bench to mourn the loss of their M and S Prawn Mayo on malted brown. After about a minute of poking the water tentatively with my foot, I decided to walk around to the Bathing Pools. The pools in question are two historic Lidos that look out towards Castle Cornet and the islands of Herm and Sark. Originally they were intended to be used separately by the Victorian sexes i.e.. one pool for ‘gentlemen’, one for ‘ladies’, however they are now open to all members of the general public all year round and also feature as an arena for….. underwater cycling. Apparently, footage of this sport taking place was featured on Blue Peter, back when I was at school in Guernsey. I don’t remember being very aware or concerned about the cycling at the time, just being a bit miffed that I didn’t get to miss school to go and admire Gethin Jones, who was presenting the segment.

ANYWAY. At the bathing pools, I soon found myself encircled once more by a circle of the sea vultures, who were very intrigued by the sudden appearance of another creature with food. They looked at me with their beady eyes and razor sharp beaks approaching closer every time I turned my back. Eventually they realised that all I had to offer was a bit of chargrilled pepper wrapped in seaweed and they lost interest. I can’t really blame them. Chargrilled pepper is a little bit of a letdown if you’ve set yourself up for an M and S sandwich. I almost got hit by a wave (the pictures above look deceptively tranquil) and I headed back home with a smile on my face and sea-salt in my hair.

For those of you that don’t know, I am a BIG FAN of Victor Hugo, a French author who penned many novels and poems, the most famous works being “Notre Dame de Paris” (The Hunchback of Notre Dame) and “Les Misérables”. Hugo lived in exile on Guernsey, my home island, from 1855-1870 and it was during this time in Guernsey that ‘Les Misérables’ was published – a book that would later become a renowned musical, often referred to by theatregoers as “Les Mis”.

Below, is a picture of one of the many beautiful views that Guernsey has to offer… 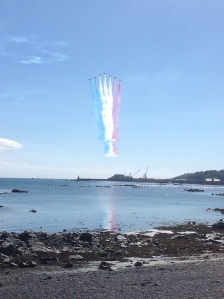 Smoke from the Red Arrows appearing as the French flag

It will probably not have escaped your attention that this musical has recently adapted into a film, starring Hugh Jackman, Russell Crowe and Anne Hathaway, amongst other big names. It was with unbridled excitement that I scampered off to the ODEON at the Metro centre this weekend, to watch the must see film of the year… in IMAX, no less.

During my time at school in Guernsey, I did a lot of musical theatre and also sang in several school choirs – now I can’t recall the exact amount of times I was forced to sing songs from “Les Mis”, but let’s just say that when I was sat in my plush seat at the ODEON this weekend watching the plot of the film unravel, I was lip syncing along. Yeah, that’s right, growing up in Guernsey means that you have quite an intimate relationship with this particular work, whether you like it or not… Luckily, I love everything to do with Victor Hugo, and this film adaptation was no different! 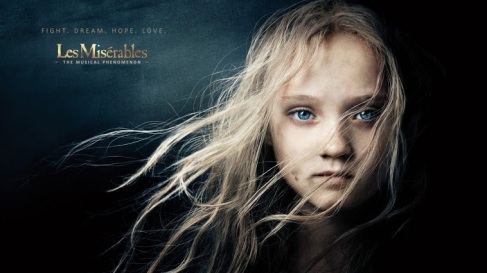 If I had to sum up the film in one word, I would have to simply say… GLORIOUS.

I didn’t notice the time passing. Hugh Jackman was awesome and Anne Hathaway was haunting in the role of Fantine (finally managing to convince critics that she is ‘Mia Thermapolis’ no more*) I particularly adored Isabelle Allen in the role of ‘Cosette’ (you can see from the above poster just how ethereal, vulnerable and credible she looks in the role). The whole film was a sumptuous feast for the eyes and for the senses – at the end I heard the men around me sniffling as they clapped when the credits started to roll. If you enjoyed the film ‘Warhorse’ and the emotions that it stirred up inside you, then please go see ‘Les Mis’… and bring an industrial size box of tissues. At the end, I had to be walked around the Metro centre a few times and shown happy sparkly things until I managed to perk up.

Would I go see it again?

YES, in a heartbeat.

I’m sure that Victor Hugo would have loved to see his novel make it to Hollywood. If you enjoyed the film and ever find yourself in Guernsey, then make sure that you visit Hugo’s old residence, Hauteville House, which has been kept as a monument to him by the City of Paris. if you’re interested in literature, stunning views or wacky interior design, his house really is a must see.

Knock on the door, make an appointment to visit, and you will find yourself stepping out of the hustle and bustle of St Peter Port into a sombre French hallway. You will be led on a visit into Hugo’s world by a guide who will explain how the objects in the house are not what they seem… Mirrors, ornate carvings and the repeated initials V and H alongside other symbols and motifs will reveal themselves to you and remain in your mind long after your visit. The stunning view of the Archipelago of the Channel Islands from the top of the house is worth the trip alone!

*Although, in my opinion, ‘The Princess Diaries’ is a great film and I will hear no bad word of it!!!

PS. For those interested in reading ‘Les Misérables’, it is available for free on Kindle in both English and French – below is the link for the English version