Because who doesn’t love snow and lecturers who give you carambar on a frosty morning?
For any French speakers out there, I include the hilariously bad joke that I discovered on my carambar wrapper…

Onto the main theme of this post…. SNOW. For someone who comes from an Island with quite a mild climate, where it almost never snows, I am always amazed by snow. (If ever a centimetre was to fall on Guernsey, radio warnings would go out ordering everyone to stay off the PERILOUSLY ICY roads. If this occurred during term time, we would get the day off school. I still have fond memories of these snow days… but all the snow would thaw by the end of the day)

IN DURHAM THERE IS REAL SNOW. THEY DON’T KNOW PERILOUS CONDITIONS. However I am no snow leopard. I am not used to these climes. And often, I become Bambi on ice. I slip, I slide, even when I am wearing Doc Martens.

Around this time last year, when I was living in France, I had the opportunity to go skiing for a day for the almost unbelievably low price of ten euros. I had such a brilliant time; eating st nectaire (cheese) in the mountains, wearing bright aqua salopettes, and trying to avoid causing collisions on the button lift (or as it is delicately known in French…the tire-fesse) Being surrounded by snow and chalets was an incredible feeling and I really hope to ski some more one day. But until now, just the sight of snow will suffice… However… although it is very beautiful in Durham, I still miss the snowcapped volcanoes of Clermont, the crisp icy feeling of walking home on powdered pavements after a midnight tram ride…. and I also miss the stunning view across the Bodensee of the snow covered mountains on the Swiss/German border of Konstanz.

I digress, here are some pictures of a snowy northern city.

(In the first picture…. has our stag mascot been visited by his friend the Yeti? This made me smile at ten am in the morning… small things!) 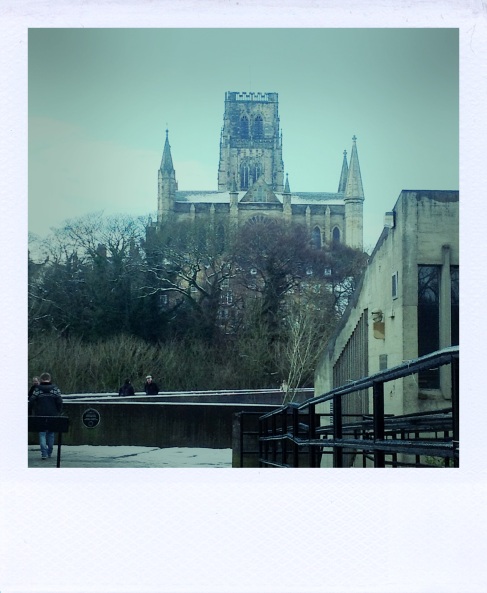 The third picture down is the view from my window. Aren’t I lucky to have such a lovely fairytale view? (Maybe I am over exaggerating… it’s the snow that has gone to my head!)

This site uses Akismet to reduce spam. Learn how your comment data is processed.